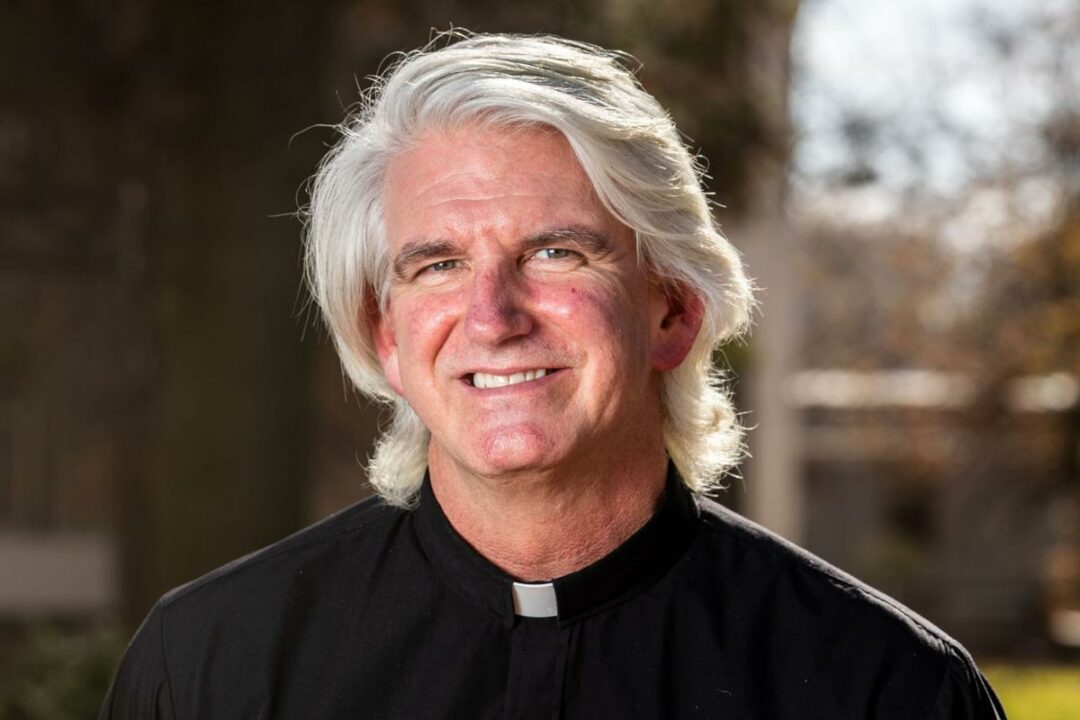 There are two camps when it comes to the Rev. Dave Korth’s ever-growing mane of silver hair, he says. The side that loves it and brings the pastor of Sacred Heart Church headbands, scrunchies and hair ties and jokingly tells him they want to invest in his hair product company. And the other group, which includes the more motherly figures who can’t believe the flip he’s developed, and want him to cut it right away. As in having his mom, Margaret, knock him out and give it a chop. “I can’t wait to get it cut,’’ Korth said of his pandemic locks. “I had to turn 54 to find out I actually had some curl in my hair.’’ Korth last had his hair trimmed in March and was overjoyed when barbershops and hair salons started reopening in May after being closed because of the coronavirus.

He typically wears his hair very short on the sides and a little longer on the top. But then he decided, and he’s still not exactly sure why, that he would let his hair go as an indicator of just how long the pandemic has been raging. At the eighth-month mark, his hair is shoulder-length. Korth said he won’t get it cut until a vaccine is developed. “Until we get a vaccine that is not from Russia and is OK,’’ he said. “Even recently, I’ve been more clear with people. I don’t have to receive it. We just have to have a vaccine that is OK in the States.’’ The Rev. Dave Korth said some people love his lengthening locks and others want him to cut it right away. “I can’t wait to get it cut,’’ he said.

“I tell you what. If someone comes forward and gives CUES a million dollars if I get my hair cut, I’m taking it.’’Korth is president of the CUES School System that oversees the Sacred Heart, Holy Name and All Saints grade schools. CUES stands for Christian Urban Education Services. He has to raise $5 million a year to keep the schools running, so a $1 million donation definitely would come in handy. It would also end his daily battle with his hair. Without a heavy dose of leave-in conditioner, Korth said, he looks just like Jeff Daniels in the movie “Dumb and Dumber.’’ “It’s over my eyes, all over the place,’’ he said.

“I can’t go out in public looking like this.’’ Korth says he can’t believe he’s actually talking about hair product. It’s never been something he’s had to address, especially in the 28 years he’s been a priest. He was too young in the ’70s growing up in Randolph, Nebraska, to rebel and have long hair, and until he moved to Omaha he had his own favorite barber in his uncle and godfather, Martin Gubbels. “I probably would not have done this if I still had my own personal barber to go to,’’ he said. “No. 1, he wouldn’t let me.’’ The notoriety he’s gained from his lengthening hair is actually Korth’s second brush with fame this year. He said he might have been caught dancing in his parish’s rousing version of “Oh, Happy Day,’’ an Easter tradition that was taken to a new level this spring with soloist Toni Holiday, aka Tamborine Toni. You can find it on YouTube. Korth often mentions his hair in his sermons — he’s praying for someone to find a vaccine.

He recently discovered that the patron saint of barbers is St. Martin de Porres, so now he has someone to pray to. He even thinks it’s attracted more people to the parish’s online Masses. All kidding aside, Korth hopes that all the hoopla brings people some joy and a few laughs. He also wants his long hair to remind people about the sacrifices made by health care workers and teachers during the pandemic. “It’s important that we show our appreciation and watch after the mental health of our teachers and school staff,’’ he said. “This is an awful lot of pressure we are putting them under.’’ For people who don’t see Korth often, it’s a shock to see how much his hair has grown. It isn’t quite long enough to tie back, although that’s coming soon. He’s also made one other tiny request before it’s cut and the hair is donated to Locks of Love. A good friend from his days as the director of St. Augustine’s Indian Mission in Winnebago used to cornrow her son’s hair before all of his basketball games. Although no one will ever see it — he hopes — he’s asked if she’d do the same just once to his hair. “I have that to look forward to,’’ he said.